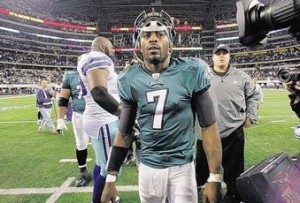 She answers quickly and disdainfully. “I wanted to throw up. … I don’t think he should be given a stuffed dog.”

Vick continues to draw heated debate into his second season of NFL reinstatement and three years after being sentenced to 23 months in prison for running a dogfighting operation. Many viewpoints are personal and emotional. On the cusp of perhaps the league’s biggest game all season — Eagles at Giants Sunday for first place in the NFC East — we present viewpoints from three parties: an Eagles fan who believes Vick deserves another chance, a diehard football fan who says we aren’t entitled to cast judgment and a dog lover and trainer.
The Eagles fan

Jim Bannon’s dad grew up in Philadelphia and had Eagles season tickets dating from 1961. Many family members remain in the Philly area, and Jim, raised in Scranton, Pa., spent his childhood years attending a half-dozen Eagles games per season. He’s a local business owner and lives in Mount Hope, just outside Middletown. He’s married with three children ages 7, 9 and 10.

Bannon is sure to point out that he finds Vick’s crimes “absolutely atrocious.” But when the Eagles announced the Vick signing, Bannon had another reaction. “I was ecstatic,” he says.

Bannon points out that pro sports are filled with players getting second chances for assorted serious crimes. Why not Vick? Bannon’s boys, 9- and 10-year-old Eagles fans, are still a bit young to comprehend the details of Vick’s actions. Bannon drew a rough outline for the kids: Vick ran with the wrong crowd, got into trouble, paid for his mistakes, and “what he did was a terrible thing.”

“They appreciate his talent,” Bannon says.

Chris Flowers is 35 years old, married and the father of five living in the Town of Newburgh. He’s a diehard football fan whose substantial thirst for fantasy football (nine leagues at last count) barely represents a sip compared to his consumption of all things Chicago Bears. He owns a pit bull named Obi and absolutely would take Vick on his team.

“Well,” Flowers begins, “as someone who has made my share of mistakes, and as a Christian, it’s my nature to forgive. But in truth, it is not my place to forgive. In my opinion, it is not my place to judge him. Only he and God know whether he has changed. But I will say this: A man can be measured by his actions. He admitted guilt, went to prison, served his time and has been out in front of this situation and taken responsibility and is now an advocate for animal rights, so his actions speak louder then his or anyone else’s words.”

Shari Forst is all for second chances. She just doesn’t consider Vick a prime candidate. She wrote letters to the NFL and to the Eagles expressing her concerns, her anger, at the reinstatement and signing of Vick. She got no reply. Forst fails to see genuine remorse and contrition in Vick interviews.

Even abused women can make a conscious choice to run from their abuser, Forst says. Dogs can’t help themselves. They are essentially at the whims of their owner. Yet they have incredibly sharp senses, which is why Forst speaks confidently of their intuition.

“If you put (Vick) in front of a dog right now,” Forst says, “that dog would react.”

A behaviorist is responsible for evaluating a dog to determine what problems are going on, why they are going on and coming up with a plan to correct the issues. In other words the behaviorist looks into the canine mind to figure out how the dog thinks and lets owners understand why the behavior is occurring and then comes up with a plan to correct it

When an owner states they are having problems with their dog other then commands it is helpful to have a behaviorist get involved. If your dog is well behaved except that he doesn’t sit or heel then you probably want training. If your dog is jumping, chewing items, is aggressive, or you believe has any mental or obsessive problem then you want a behaviorist. This is usually seen in destructive behavior, any form of aggression, ‘the bad dog syndrome’ and many other terms owners complain about.

How do you determine the cause of the problem?

A behaviorist observes and evaluates the dogs body language and personality as well as interviewing the owners and observing their interaction with their dog in order to determine what the causation of the problem is.

How do you solve my problem?

At times it requires simple counter conditioning or retraining of owner interactions and other times it rangers all the way to mental disorders requiring medication and advanced behavioral techniques to resolve.